See you after summer break!
Incoming student? Learn more about us!

This year Brother Bryan D. Frapp was inducted into the Theta-Zeta Alumni Hall of Fame

Brother Bryan D. Frapp was initiated in the spring of 2002, he is a past Grand Master of Ceremonies, Grand Procurator, and Grand Master. He is a Master of the Ritual, Jackson’s Man Pin #1755, Undergraduate Brother of the year and Outstanding Grand Master 2006. Brother Frapp Graduated in 2006 from Eastern, then received his Doctorate of Physical Therapy in 2012 at San Angelo State University. As an Alumnus he has served as Ritual Commissioner and Deputy Commissioner for Colony Development of area 4. He currently resides in Soldotna, Alaska with his wife, Amy, and 7-month old son Cooper. In his career he is currently undergoing Board Certification for Orthopedic Certified Specialist and is practicing Mechanical Diagnosis and Therapy.

Check out our social media 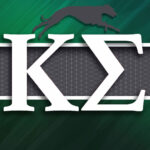